CNC Laser cutting is a modern technology that works with a laser to cut materials, and is commonly used for industrial manufacturing applications, but is also starting to be used by programs, small businesses, and hobbyists.

A typical industrial laser for cutting materials consisted of a motion management system to follow a CNC or G-code of the pattern to be cut onto the material. The targeted laser beam is guided at the material, which then either melts, burns vaporize away, or is blown away by a jet of gas, keeping an edge with a high-quality surface appearance. Industrial laser cutters are used to cut flat-sheet material as well as structural and piping materials.

CNC Laser cutting works by routing the output of a high-power laser most commonly through optics. The laser optics and CNC (computer numerical control) are used to point the material or the laser beam generated. 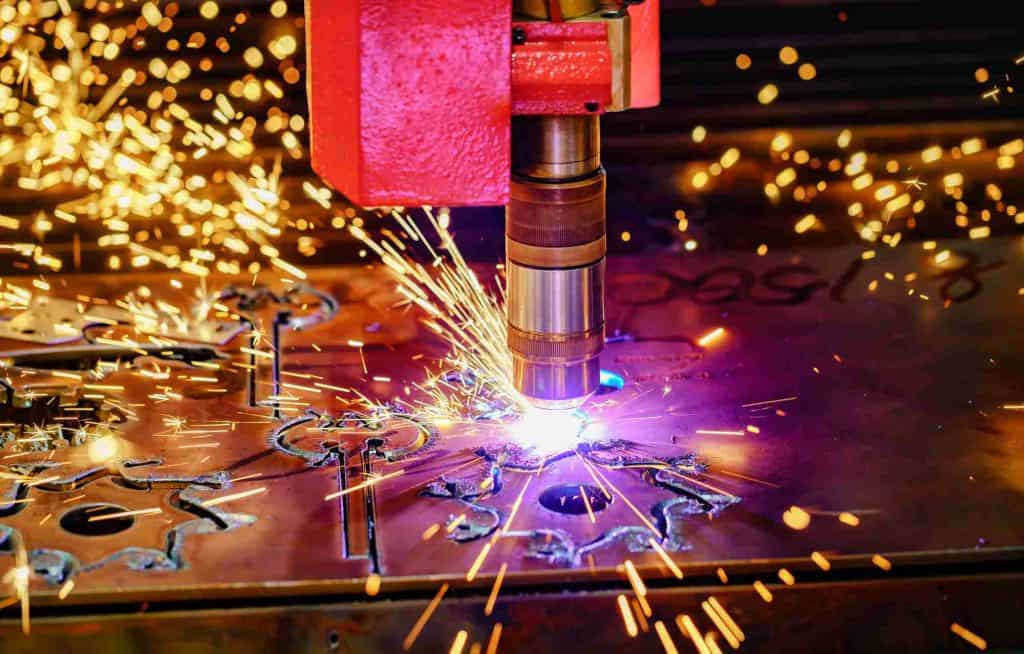 In 1965, the original production laser cutting equipment was used to drill holes in diamond dies. This machine was made by the Western Electric Engineering Research Center. In 1967, the British pioneered laser-assisted oxygen jet cutting for metals.

In the early 1970s, this technological innovation was put into development to cut titanium for aerospace applications. At the same time CO2 lasers were modified to cut non-metals, such as fibers, because, at the time, CO2 lasers were not strong enough to overcome the thermal conductivity of metals.

Advantages of CNC laser cutting over mechanical cutting include much easier work holding and reduced contamination of workpiece (since there is no cutting edge which may become contaminated by the material or taint the material). Accuracy may be better since the laser beam does not wear during the procedure. There is also a reduced possibility of warping the material that is being cut, as laser systems have a tiny heat-affected zone. Some materials are also very difficult or tough to cut by more ordinary means.

Industrial laser cutting of steel with cutting directions programmed through the CNC interface.

The parallel rays of coherent light from the laser source often fall in the range between 0.06– 0.08 inches (1.5– 2.0 mm) in diameter. This beam is typically focused and magnified by a lens or a mirror to a very tiny spot of about 0.001 inches (0.025 mm) to create an extremely intense laser beam. To reach the smoothest attainable appearance during contour cutting, the path of beam polarization must be revolved as it goes around the periphery of a contoured workpiece. For sheet metal cutting, the focal length is usually 1.5– 3 inches (38– 76 mm).

Laser cutting for metals has the advantages over plasma cutting of being more accurate and utilizing less energy when cutting sheet metal; however, most industrial lasers can not cut through the greater metal thickness that plasma can. More recent laser machines functioning at higher power (6000 watts, as contrasted with early laser cutting machines’ 1500 watt ratings) are moving toward plasma machines in their capacity to cut through thick materials, but the capital cost of such units is much higher than

Mirrors or fiber optics are usually used to direct the coherent light to a lens, which concentrates the light at the work zone. The narrowest part of the centered beam is less than 0.0125 inches (0.32 mm). in diameter. Depending upon material thickness, kerf widths as small as 0.004 inches (0.10 mm) are possible.

In order to be able to start cutting from somewhere other than the edge, a pierce is done before every cut. Piercing normally involves a high-power pulsed laser beam which slowly makes a hole in the material, requiring around 5– 15 seconds for 0.5-inch-thick (13 mm) stainless steel, for example.

Generation of the laser beam entails stimulating a lasing material by electrical discharges or lamps within a closed container. As the lasing material is stimulated, the beam is reflected internally using a partial mirror, up until it obtains appropriate energy to escape as a surge of monochromatic coherent light.

In addition to the power source, the type of gas flow can alter performance as well. In a quick axial flow resonator, the mixture of carbon dioxide, helium, and nitrogen is circulated at very high velocity by a turbine or blower. Transverse flow lasers circulate the gas mix at a lower velocity, requiring a simpler blower. Slab or diffusion cooled resonators possess a static gas field that requires no pressurization or glassware, leading to price savings on replacement turbines and glassware.

Fiber lasers are a type of solid-state laser that is instantly growing within the metal cutting industry. Unlike CO2, Fiber technology utilizes a solid gain medium, as opposed to a gas or liquid. The “seed laser” produces the laser beam and is then enhanced within a glass fiber. With a wavelength of only 1.064 micrometers fiber lasers produce an incredibly small spot size (up to 100 times smaller compared to the CO2) making it ideal for cutting reflective metal material. This is one of the fundamental advantages of Fiber compared to CO2.

CO2 lasers are typically “pumped” by passing a current through the gas mix (DC-excited) or using radio frequency energy (RF-excited). The RF technique is more recent and has ended up being much more popular. Since DC designs need electrodes inside the cavity, they can experience electrode erosion and plating of electrode material on glassware and optics. Because RF resonators have external electrodes they are not subject to those problems.

There are three primary types of lasers used in laser cutting. The CO2 laser is suited for cutting, boring, and engraving. The neodymium (Nd) and neodymium yttrium-aluminium-garnet (Nd: YAG) lasers are similar in style and vary only in application. Nd is used for boring and where high energy but low repetition are required. The Nd: YAG laser is utilized where extremely high power is needed and for boring and engraving. Both CO2 and Nd/Nd: YAG lasers can be used for welding.

The laser generator and exterior optics (including the focus lens) require cooling. Depending on system dimension and form, waste heat may be transmitted by a coolant or straight to air. Water is a commonly used coolant, typically spread through a chiller or heat transfer system.

A laser microjet is a water-jet led laser in which a pulsed laser beam is paired into a low-pressure water jet. This is used to conduct laser cutting purposes while utilizing the water jet to guide the laser beam, much like an optical fiber, through total inner reflection. The benefits of this are that the water also takes out debris and cools down the material. Additional perks over traditional “dry” laser cutting are high dicing speeds, parallel kerf, and omnidirectional cutting.